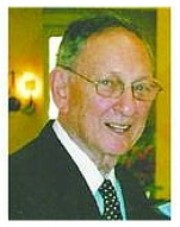 Julian A. (Sonny) Lerner a pioneer of fund management, passed away at his home on Thursday March 10, 2016.

Julian will be remembered by many former AIM employees as the founder of the Charter Fund. Speaking about Julian, Bob Graham said it is important to note that the acquisition of the Charter Fund by AIM occurred about the same time as the Weingarten/Constellation funds.

Bob recalls that Julian was a key factor in building the business and he represented AIM well.

It was a win-win situation because it was a tough market. Julian was selling directly and AIM provided the marketing muscle to build the assets in his fund.

Lanny Sachnowitz recalls what an honor it was to work for two legendary portfolio managers in Julian and Harry (Hutzler). “My colleagues and I had the chance to serve as understudies to two of the finest stock pickers in the business. I was fortunate to work closely with and ultimately succeed Julian on the Charter Fund, the fund I think he took the most pride in managing since its inception in 1968. A press article about Julian's retirement from managing the fund is available here.

I am sure that Julian would be proud to know that of all the funds AIM launched, acquired, merged or closed, the Invesco Charter Fund endures nearly 50 years on.

Lanny also recalls Julian’s sharp wit and wisdom that far exceeded what can be learned from any finance textbook. Julian was known for his sound intuition about the stock market and developed some simple, but powerful rules that served his shareholders well and made the "Charter story" quite compelling. “He was seriously competitive but never took himself too seriously,” found Lanny. “He was confident in his abilities but was always approachable and respectful of another point of view, especially when it came to delegating portfolio decisions to us young and ambitious "kids." He also had a great sense of humor and I remember accompanying him on a number of marketing trips around the country and admiring his ability to both educate and entertain his audience,” said Lanny.

Dick Berry knew Julian and Peggy and their family for 20 years before AIM acquired Charter and Dick began sharing offices with him. "We were both living in Dallas. I was doing tax-free mutual funds for AIM. It was a comfortable environment. Julian was a little eccentric at times, which made him interesting," recalls Dick.

Dick knew Julian served in WWII, but he had not known any specifics. One day at lunch, Julian was talking about General Patton, and how he was in the infantry walking with the tanks through France into Germany. Someone asked was he afraid? "Are you kidding? Julian replied. "I was walking through Nazi Germany. Of course I was afraid," Dick remembers Julian saying.

Dick echoed Lanny, sharing that Julian was very very competitive. He was a mall walker and he and his wife Peggy were religious about walking the Galleria Mall at about 7a.m. every day. He wanted to outperform everybody. In business, he wanted to outperform all the fund managers, not just those at AIM. He would calculate the funds daily. It was all very friendly and cordial.

If the measure of a life is a measure of love and respect, Julian measured up very well,” shares Lanny. “The enduring memory I have of Julian is that he was so kind and grateful for his family and friends, and for the business opportunities he had in his life.

Yet, despite all he accomplished, he never forgot where he came from,” said Lanny. As Jon Schoolar put it when Lanny shared with him the news of Julian's passing the other day, "he was the best of the best generation.”