Aug 25 2019
In 2017, we talked with David Hessel about his career at the firm from 1988-2006. He shared that when he departed, he was still interested in contributing. David followed his 18-year career at the firm serving as the CFO for The Catholic Archdiocese of Galveston-Houston. He found many similarities between the AIM Invesco years and his role at the Archdiocese. “My roles have involved trying to find solutions,” said David. “This is a key learning that stuck with me.” After a decade at the Archdiocese, David and his wife Lori are moving to their next venture: the grass-fed beef business.

Today, David and Lori are finding solutions to land management, and translating these learnings to bettering the ranch they have owned for 20 years. “At first,” said Lori, “the ranch was a family retreat. Over the years we became involved in raising beef cattle. At the same time, we are working to restore the land to a better state than it was 20 years ago,” she explained.

Trey Wilkinson recalled in an interview how Ted Bauer lived the philosophy that we are put on this earth to produce and every day you should “get up and get after it, keep your mind and body engaged.” David and Lori, like many AIM colleagues, are living that philosophy. For them, it currently translates into their goal to live off the land, and to transition from selling beef wholesale to offering their grass-fed beef on the retail market. 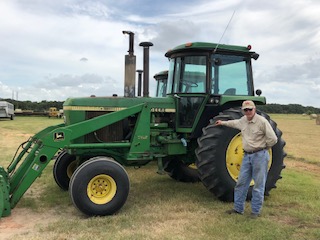 The day we spoke, David was planning to finish the interview and head back out to his tractor, which is air-conditioned and thus enables him to work in the heat of the Texas summer. Even with a tractor from 1980, which has some old school elements, David says how amazing the modernized farming equipment is. The missing piece he added was a radio with bluetooth capability.

Lori has a very large vegetable garden and is a trained master gardener. In July when the heat ended the vegetable growing season, she went to work canning tomatoes, freezing green beans and peaches. She has jars of salsa, spaghetti sauce, and other food staples lining her shelves.

Meanwhile, they are both master naturalists, working to restore their land to a more natural grass land. “If you visualize the last 100-150 years,” said David, “the land had been torn up, turned into farms and the native grasses were stomped out.” There is a volunteer program through Texas A&M to bring awareness of nature, and through a partnership between Texas A&M and the Texas Parks and Wildlife Department, Lori and David enrolled in education outreach programs. “We felt if we better controlled our land, we could be betters stewards, and so we decided to do it on our own,” said David.

The ranch is located about 95 miles directly west of downtown Houston, enabling Lori and David to spend time with two of their three children who live in Houston. They also have parents living within five miles of them to whom they provide care.

Whether they are busy with family or the farm, David says they have a lot of energy out on the ranch. “We sleep well at night. We are physically tired. Life moves on and this is our new adventure,” he said.

David and Lori would love to hear from you, and they can be reached at This email address is being protected from spambots. You need JavaScript enabled to view it..

Read 2308 times
Tweet
More in this category: « Friends Are Thrilled to Catch Up AIM Alumni at AIG »
Login to post comments